This week we're checking out the five least expensive single-family homes for sale in Green Lake.

This week we're checking out the five least expensive single-family homes for sale in Green Lake. Boundaries are set by the realtors. We didn't include any property that's currently in contract. A friendly reminder: read the fine print, as some of these abodes have strings attached.

One of the cheapest houses near Green Lake is still over a half a million, $595,000; but that's the price of being in a neighborhood that isn't just walkable, but is also run-able, bike-able, stroll-able, swim-able, and people watch-able. The Craftsman bungalow was built in 1940, and now has 3 bedrooms, 2 baths, and 1,274 square feet inside. The brick chimney, wood paneling, and bedroom upstairs are reminders of the era. Remodels, and renovations have modernized the rest. A good paint job helps. Outside it sits on a 3,005 square foot lot with tall neighbors on either side; signs of the other options in the neighborhood: apartments and condos. 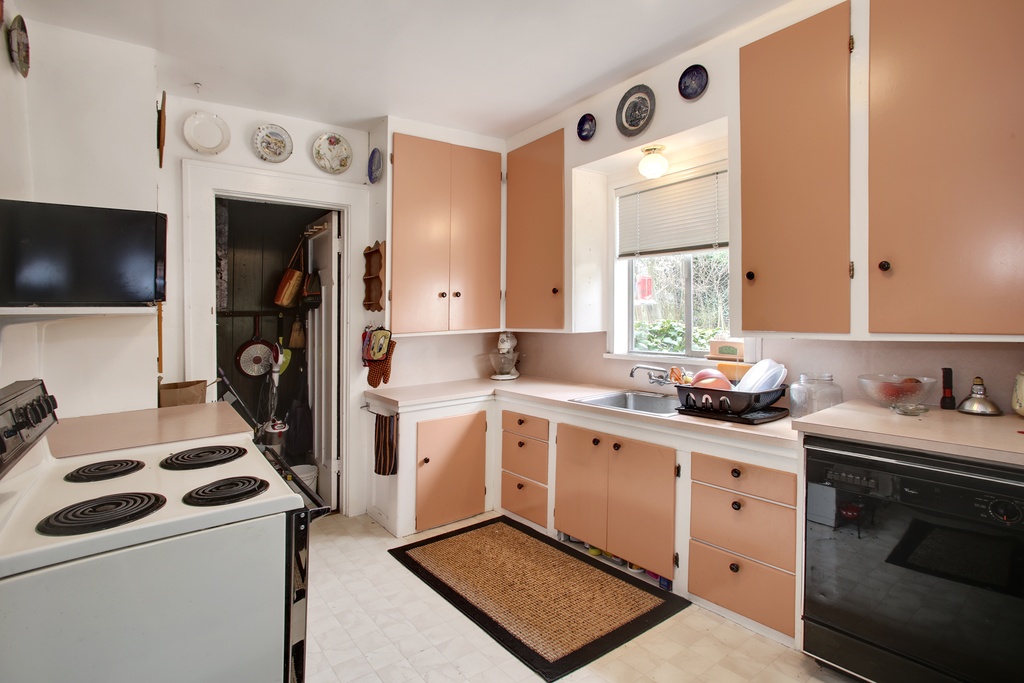 The creamy color of the kitchen cabinets is either very trendy, or a sign that it's time to update the kitchen. It can be refreshing to see a kitchen that isn't all stainless steel appliances and granite counters. They aren't the original furnishings because 1926 houses didn't come with dishwashers, unless they were called servants. This is another bungalow, something the neighborhood should be known for, that has 3 bedrooms and 2 baths in 2,040 square feet. That's larger than many bungalows and may be thanks to a bedroom downstairs. They're asking $575,000, which includes a fenced 6,298 square foot lot, and a detached garage that will work better for bicycles and smartcars than modern, standard American pickup trucks.

Put a bit of a hip to the roofline and get a much more useful upstairs that gives this 1,740 square foot house more volume for its 3 bedrooms and 2 baths. It, too, is going for $575,000; and has some original elements that have survived decades of use. Kitchen and bath tiles can do that. The magenta carpet may distract you from noticing the mullioned windows, the chimney that is prepped and waiting for ornamentation, and landscape that has stabilized and settled in. No need to wonder what will grow there because there's heritage to the foliage. The 5,000 square feet of property has to allow for stairs and a slope, plus a carport, but maybe there's enough room left over for some vegetables.
It is bright. It is blue. It is a Craftsman that is more than a hundred years old (1909). It also looks like it has been cared for, primped, pampered, and prepared for sale. The curved archways separating some of the main rooms, the chandelier, light fixtures that could be original, and dark hardwood floors contrasted by classic choices for paint colors do a lot to maintain a sense of style. They fit 4 bedrooms and 2 baths into 1,720 square feet, aided by a finished basement. The asking price is $550,000, which includes the luxurious pragmatism of a two car detached garage. It all fits on a level 4,200 square foot lot that also houses a tree (cedar) with branches wide enough to convince the grass to surrender to the moss. Gardening may require innovation.
Happy 100th anniversary! They're asking $539,000 for this 1916 3 bedroom, 2 bath. Those bricks in the kitchen look like the original chimney, which is now surrounded by modern appliances and updated cabinetry. The house has 1,580 square feet, but they've expanded by finishing the basement - including a spiral staircase that is probably fairly recent. The 3,060 square foot lot is a bit farther from the lake, on the border with Greenwood, but the distance may be small to the aerobic folks who are living by the lake to grind out the miles. Consider a few extra blocks a warmup.
· 551 NE Ravenna Blvd [Zillow]
· 7815 Dayton Ave N [Zillow]
· 5102 Green Lake Way N [Zillow]
·