Octave 9, designed by LMN Architects, is built to become part of the art

With the opening of Octave 9: Raisbeck Music Center in early March, Benaroya Hall and the Seattle Symphony hope to harness technology into infinite, immersive experiences. Rather than attract attention, the venue is more of a medium—the goal is to bring a performance to life, then disappear. The name Octave 9 is meant to nod toward pushing musical boundaries; a concert grand piano has a range of just over seven octaves.

The 2,500-square-foot venue was designed by LMN Architects, the firm behind Benaroya’s original construction in 1998—which earned them an AIA Honor Award in 2001.

“The new Octave 9 expands on the [Seattle Symphony]’s well-established educational programs, and every architectural element has been carefully designed to be adaptable and functional,” said LMN design partner Mark Reddington in a statement. “Above all, we hope this new performing arts space becomes a catalyst for new forms of music, a creative tool that pushes interdisciplinary performances to new frontiers, and a participatory sound machine for the city of Seattle.”

In practice, that means a carefully-designed facility that’s both flexible and agile. Like with the main symphony hall, Octave 9 will feature a carefully-designed ceiling that’s both an acoustic and architectural piece. A kind of honeycomb holds acoustic absorption material in its openings, sometimes hiding various other systems: subwoofers, speakers, microphones, lighting, and projectors, along with the HVAC system.

Unlike the main symphony hall, Octave 9 isn’t designed around a specific performance point—it’s supposed to be aurally and visually immersive for audiences, no matter where they’re standing. 13 projection panels can be adjusted on a circular track to hit various points around the room. Materials were all chosen to absorb sound, like carpeting and micro-perforated wood. 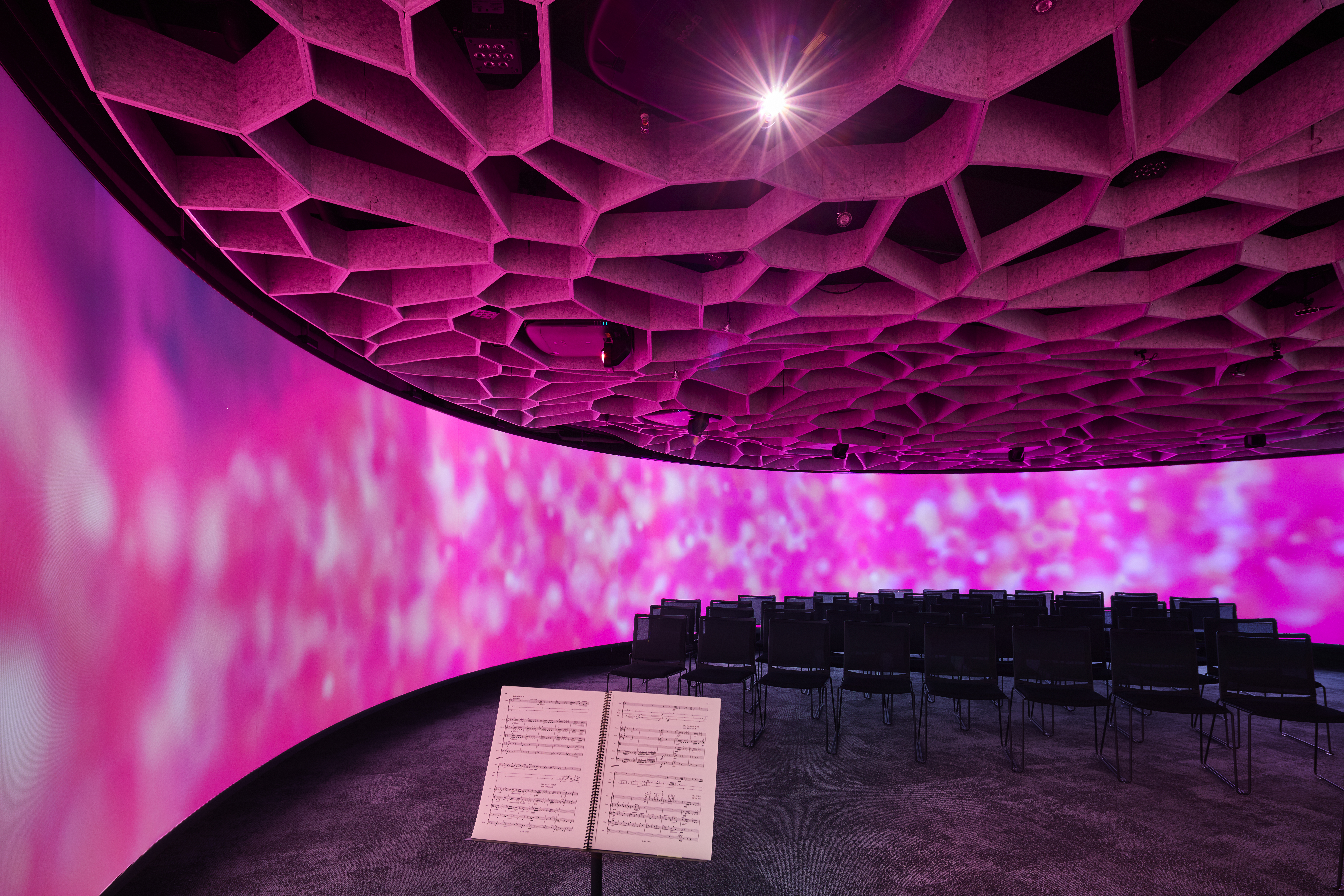 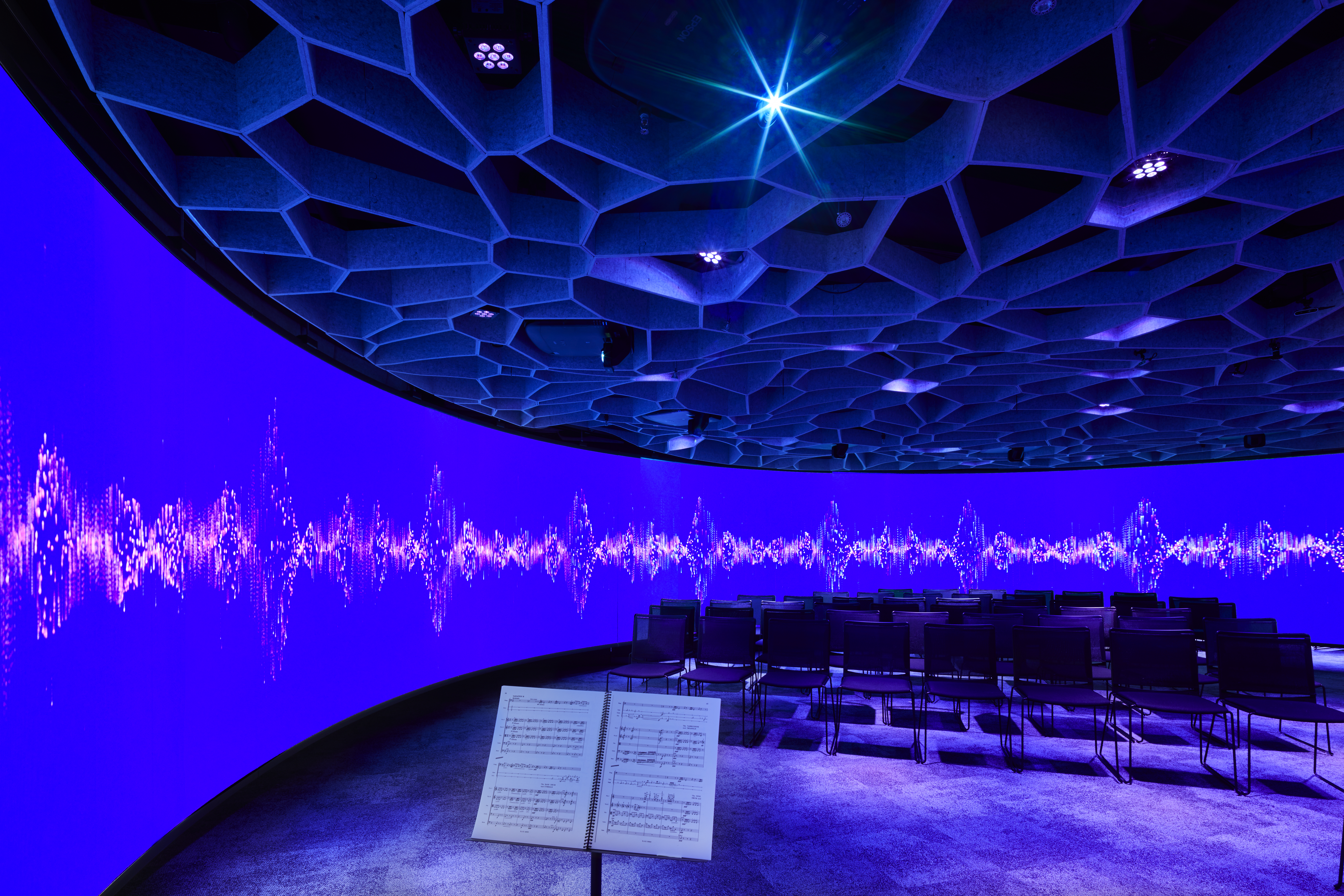 The honeycomb ceiling reflects the overall look and feel of the room configuration.

Since it replaces the Soundbridge Music Discovery Center, its flexibility isn’t just about different kinds of performance. It’s the new home for Benaroya Hall’s educational programs, in addition to hosting group meetings and other events. Modular elements add to this versatility: Removable walls wrap around the central space in a cylinder. A roll-away bar is ready for social events but doesn’t get in the way otherwise. Instrument storage is built-in.

True to mission, the next couple of events up on Octave 9’s schedule are a hybrid music performance and book reading March 20—and a 24-hour contemporary music marathon with works from more than 50 living composers, co-curated with experimental artists March 23 and 24.

“Octave 9 is a space for artists to invent new experiences that will define our time,” said Krishna Thiagarajan, president and CEO of the Seattle Symphony and Benaroya Hall, in a statement back in January.

“Arts are the way a society articulates itself, and through technology and creative design, Octave 9 enables us to forge a new path in the way we create and experience music,” added Thiagarajan in a statement provided through LMN.

The project budget was $6.7 million, funded through public and private funds, including 4Culture and local philanthropists, including namesakes James and Sherry Raisbeck. LMN Architects and Meyer Sound Laboratories—the room is equipped with the Meyer Constellation digital acoustic system—both worked on and financially supported the project.